GameChange Solar is Now in Africa 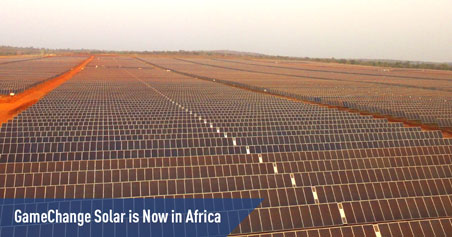 The project is Togo’s first utility-scale renewable energy project developed by AMEA Power, one of the fastest-growing renewable energy independent power producers in Africa, the Middle East, and emerging Asia. Headquartered in Dubai, AMEA Power will operate the plant for 25 years.

India-based Jakson Group, with 75 years of expertise in the energy industry, provided turnkey EPC solutions for the project. In addition, Jakson Group will also undertake operations & maintenance of the facility for a period of two years.

The solar facility was completed in record time - just 18 months despite numerous challenges due to the COVID pandemic. GameChange Solar’s Genius Tracker™ was selected for the project because of its ability to produce more power and due to the tracker’s fast install time. This helped the facility meet its aggressive development timeline.

The new Togo solar facility is considered a key step toward supporting the country’s goal of providing universal access to electricity for its citizens by 2030 and increasing the share of renewables in the energy mix to 50%.

Derick Botha, Chief Commercial Officer for GameChange Solar, stated, “We were pleased to have GameChange Solar selected as the solar tracker supplier for the Togo facility. The fast-installing Genius Tracker™ system we supplied was instrumental in achieving the on-time completion of the project. We are excited to have our trackers in use on a new continent and we look forward to making an impact on the clean energy supply throughout Africa.“