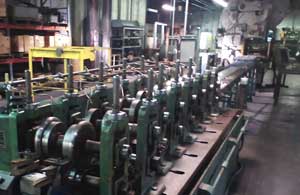 NEW YORK, NEW YORK – January 9, 2017 – GameChange Solar announced that it is adding three roll forming lines in North Carolina. These lines will be operational in the second quarter. The addition of these lines in North Carolina brings GameChange Solar’s domestic production capacity to over 4GW, more than sufficient to handle anticipated domestic 1.5 to 2GW 2017 expected shipments of fixed tilt racking and trackers. GameChange has manufacturing locations on the east coast, the Midwest and the western United States.

Andrew Worden, CEO of GameChange Solar, stated: “With the addition of these three roll forming lines, we have meaningfully increased our manufacturing capacity. We are happy that we can bring important job growth to North Carolina, as well as reduce our already fast delivery timelines to our valued customers in the Southeast.”