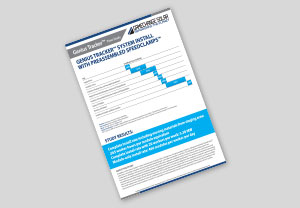 The Genius Tracker™ system’s install speed advantage is primarily derived from the use the proprietary preassembled SpeedClamp™ which has an unprecedented install rate of 464 modules per worker day, and up to 300% faster than many systems. The other significant differentiator that helps push the Genius Tracker™ far ahead of other systems for install speed is the preassembled drive system which installs in only 6.5 minutes with two workers, less than one third of the time for typical tracker drive systems.

Andrew Worden, CEO of GameChange Solar, stated: “Customers have been calling for faster install to reduce costs and we have listened. The radical breakthrough which the Genius Tracker offers enables our customers to significantly reduce their installation costs for single axis trackers.”