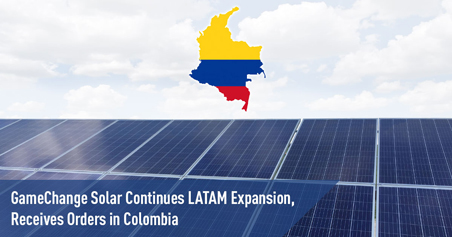 NORWALK, CT – February 24, 2021 - GameChange Solar today announced that it has received two orders for the MaxSpan™ Post-Driven Fixed Tilt Systems. These orders will be a total of 36.7 MW for shipments to Colombia.

The release of these new orders contributes to the international expansion of GameChange Solar's global business and furthers the company’s mission to repower the planet and reduce the cost of solar.

Arturo Herrero, Chief Business Development Officer at GameChange Solar, stated: "We’re proud of having been selected to start, what we believe, will be a very long and fruitful development of the Colombian PV Solar market."

Mr. Gabriel Losada, CEO of D&P Group, stated: “This step is one of the many ambitious goals that the company has committed in order to orientate our business deeds through increasing energy production and optimize energy consumption in Colombia. The country ultimately seeks to sojourn climate change, protect biodiversity, enhance people’s talent in the region, and becoming a world reference in sustainability. We are proud of the process that is now being materialized in such projects and the permanent support and resilience that we have continuously shown as an eco-friendly corporation.

D&P Group has an interesting pipeline in Colombia of PV Solar projects and it’s placing its trust in GameChange Solar’s technology and service with its first two projects called Atlántico Solar I BARANOA and Atlántico II POLONUEVO for a total amount of 29.2 MW ac power / 36.66 MWp DC power. They are located in the municipalities of Baranoa and Polonuevo with a 2 Portrait module solution producing a total power of around 65.857 GWh a year powering annual consumption for approximately 5,373 homes and reducing CO2 emissions for over 205536.3 tons. The total investment is planned to reach an estimate of $34.6 million USD. D&P Group has committed to the goal of developing over 300 MW in Colombia and Panama in the upcoming years."