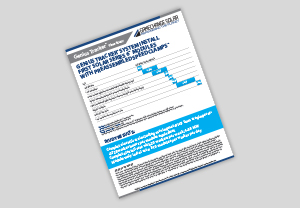 NEW YORK, NEW YORK – January 15, 2019 – GameChange Solar today announced that a recently completed time study clearly demonstrates that the Genius Tracker™ is the fastest installing single axis solar tracker in the industry utilizing First Solar Series 6™ modules. The Genius Tracker™ system’s install speed advantage is primarily derived from the use of the preassembled SpeedClamp™ which has an unprecedented install rate of 310 Series 6 modules per worker day and up to twice as fast as typical competitor systems.

The other significant differentiator that helps push the Genius Tracker™ far ahead of other systems for install speed is the preassembled drive system which installs in only 6.5 minutes with two workers, less than one third of the time for typical tracker drive systems.

Derick Botha, Senior VP Business Development at GameChange Solar, stated: “Customers have been asking for a fast-installing solution for the new First Solar Series 6 module. The SpeedClamp™ which mounts modules to the torque tube with no panel mounting hardware is ideally suited for the Series 6 module and has demonstrated in our Time Study when utilized with the Genius Tracker™ to significantly reduce installation time for single axis trackers.”