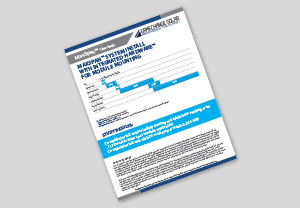 NEW YORK, NEW YORK – January 4, 2019 – GameChange Solar today announced that a time study has been released which shows a substantial improvement in the installation times for the GameChange Solar MaxSpan™ Post System using integrated hardware for module mounting. There are additional benefits from the use of other integrated hardware which will be examined in future time studies to show even faster install times.

The introduction of integrated hardware for bottom mount module installation means there are far fewer small hardware components needed to install modules. There is just one oversized self-grounding toothed flange bolt and one oversized serrated flange nut which replaces four parts. These parts included smaller bolts, nuts, washers, and star washers, which are easy to drop and take more time to install. The new module mounting hardware is being rolled out in 2019 and should be standard in most systems by the end of the year.

Derick Botha, Senior VP of Business Development at GameChange Solar, stated: “Our customers have asked for faster install speed and lower parts counts and we have been listening. The introduction of integrated module mounting hardware has resulted in significantly faster install times, and have moved the GameChange MaxSpan™ Post system to the clear leader for install time for bottom mount attachment systems.”