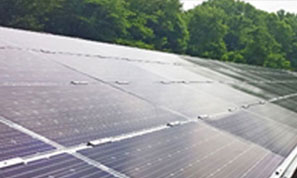 NEW YORK, NEW YORK – June 21, 2018 – GameChange Solar today announced that the Genius Tracker™ as well as fixed tilt systems installed with Bifacial modules over the past several years have seen meaningful production increases due to the use of Bifacial modules.

Andrew Worden, CEO of GameChange Solar, stated: “We saw Bifacial modules starting to be deployed on our fixed tilt system several years ago and also on our Genius Tracker starting two years ago. The owners of the project have seen meaningful energy gains, especially because both the Genius Tracker and the MaxSpan Fixed tilt systems used have high ground clearance. The critical design factors for high power output gain from the Bifacial modules that we have seen so far include having the modules in landscape configuration so that the torque tubes or purlins do not shade the modules and high ground clearance for the leading edge of the lower modules. Dense grass greatly reduces the energy gain. The Bifacial panels do very well with snowfall and white or other light colored and more reflective ground cover."